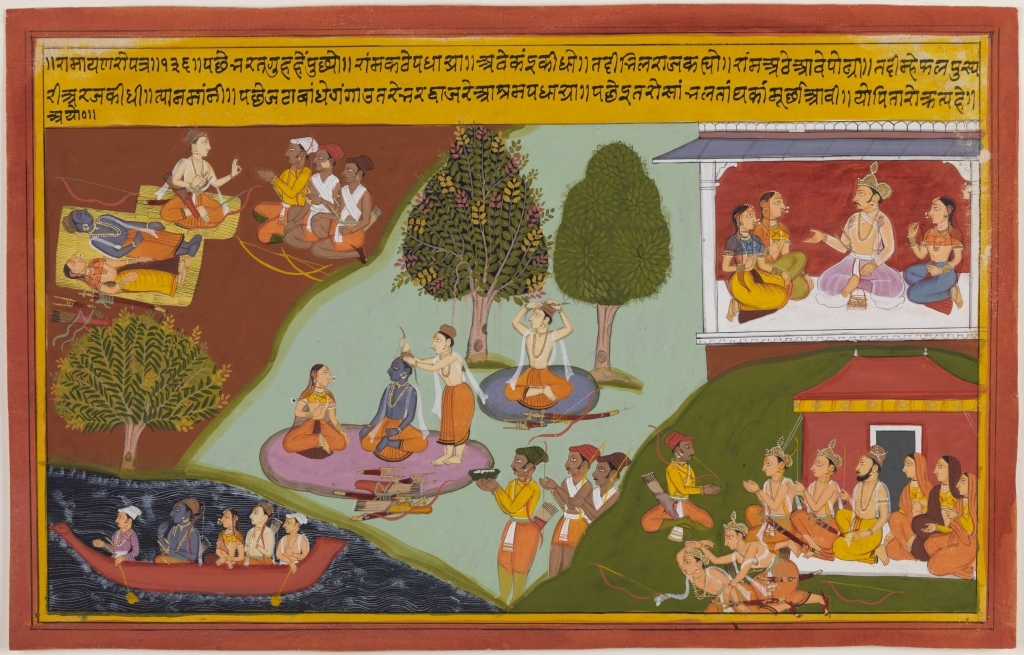 The Rajasthani text at the top of this painting directs us to begin at the bottom right, where Guha, chief of the Nishadas, a forest tribe, reports his earlier encounter with Rama to Bharata, outside of his royal tent. The other scenes depict Guha’s account. At top left, Guha converses with Lakshmana, who watches over Rama and Sita as they sleep on the forest floor, about the precarious state of Ayodhya. A scene of the court is seen at top right, with Dasharatha surrounded by his three queens. Guha then explains how, taking on ascetic garb, Rama matted his hair with the sap of a banyan tree (center), prior to crossing the Ganges River, ferried by Guha (bottom left). The story ends in the bottom right, where Bharata appears again, collapsing in grief after hearing of Rama’s arduous journey.
In reaction to Rama’s untimely exile, the painting illustrates multiple forms fraternal piety: Lakshmana’s steadfast devotion and Bharata’s pious grief. One joins Rama in his forest trial; the other must endure his absence, reluctantly ruling a kingdom bereft of its true king.

Gift of Jayantilal K. and Geeta J. Patel & Family to further the study of Hinduism

© Michael C. Carlos Museum, Emory University. Photo by Bruce M. White, 2015.
This image is provided by the Michael C. Carlos Museum of Emory University, who retains all rights in it. This image is made available for limited non-commercial, educational, and personal use only, or for fair use as defined by United States law. For all other uses, please contact the Michael C. Carlos Museum Office of Collections Services at +1(404) 727-4282 or mccm.collections.services@emory.edu. Users must cite the author and source of the image as they would material from any printed work, but not in any way that implies endorsement of the user or the user's use of the image. Users may not remove any copyright, trademark, or other proprietary notices, including without limitation attribution information, credits, and copyright notices that have been placed on or near the image by the Museum. The Museum assumes no responsibility for royalties or fees claimed by the artist or third parties. The User agrees to indemnify and hold harmless Emory University, its Michael C. Carlos Museum, its agents, employees, faculty members, students and trustees from and against any and all claims, losses, actions, damages, expenses, and all other liabilities, including but not limited to attorney’s fees, directly or indirectly arising out of or resulting from its use of photographic images for which permission is granted hereunder.

Copy the code below into your web page