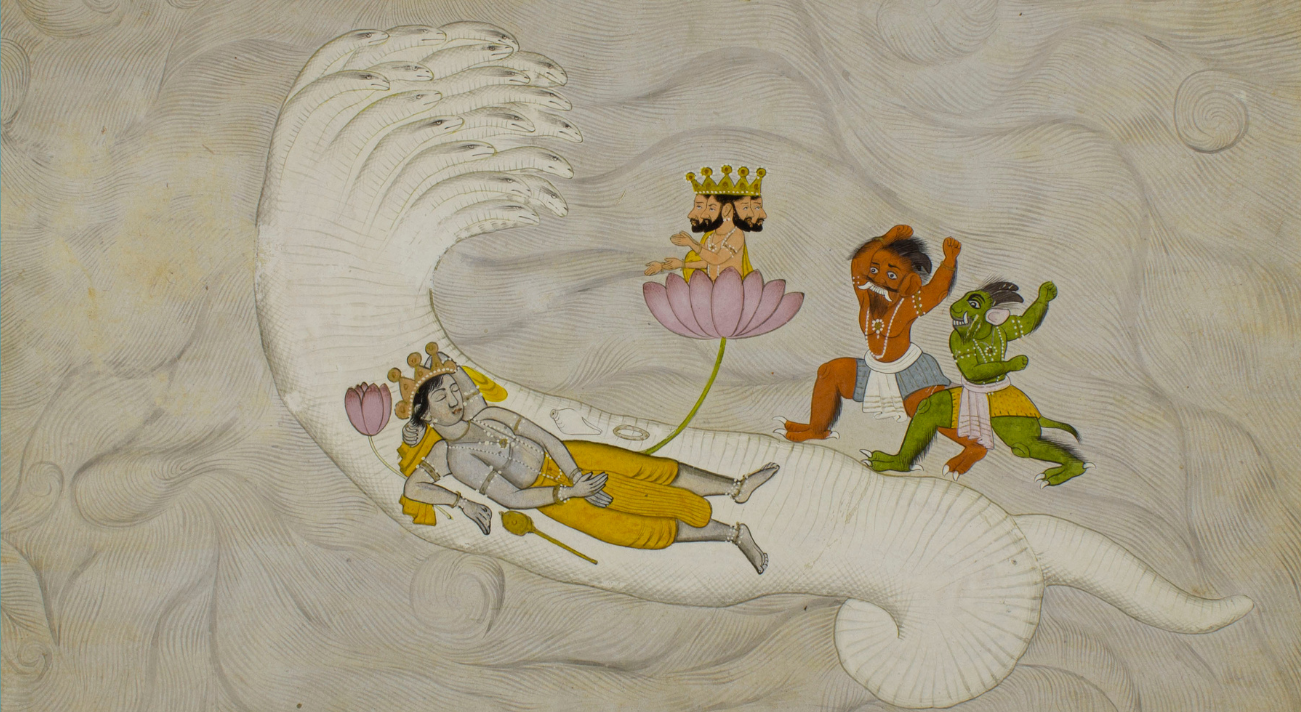 The Avatars of Vishnu

VISHNU, one of the most popular Hindu deities, manifests in various forms known by the Sanskrit term avatāra, which means “descent.” Throughout the cyclical periods time known as yugas, Vishnu descends to Earth in times of need to restore cosmic order and balance. His avatars are the embodiment of dharma, a central concept in Hindu traditions that can be understood as order, righteousness, and duty.

Vishnu is most easily identified by his blue skin and the four objects he frequently holds: the conch, mace, discus, and lotus, even in his many forms. While the exact number of avatars is contested, this exhibition focuses on the ten most common. These different incarnations evolve from animals to humans as the cycles of time progress. In defeating malevolent beings, these avatars bring divine balance to the cosmos:

The most beloved avatars, Rama and Krishna, appear in the two great Indian epics, the Ramayana and the Mahabharata. Although Buddhism developed separately from Hinduism for many centuries, the Buddha has been incorporated into the list of avatars. Many Hindus await the arrival of Vishnu’s final manifestation, Kalki, who will descend to Earth and restore dharma.

The avatars’ stories are told in sacred texts, oral narratives, images, dance, music, and other performance traditions throughout South Asia and beyond. This exhibition displays paintings, sculptures, and objects of popular culture dated between the tenth and nineteenth centuries. The bronze, black stone, and sandstone sculptures come from North, South, and East India. The watercolor paintings were for the most part created by master painters in the courts of the Rajput kingdoms of Northwest India.

This exhibition was made possible through the generous financial support of the Christian Humann Foundation and the E. Rhodes and Leona B. Carpenter Foundation. Special thanks to Jayantilal K. and Geeta J. Patel & Family, Harshna and Pyush Patel, the Nathan Rubin Ida Ladd Foundation, and William Torres for helping the museum enhance its collection of South Asian art through gifts and loans.

This exhibition was curated by students in the Spring semester 2021 course Depicting God in Hinduism: The Avatars of Vishnu (RELIGION 270-3, ART HISTORY 289-2), taught by Dr. Ellen Gough, assistant professor in Emory’s Department of Religion.

As part of the course, distinguished art historians from around the country met with students and gave public lectures via Zoom. View these lectures HERE.

The Emory Center for Digital Scholarship created a 3D virtual version of the exhibition using a Matterport camera. View it HERE.

Click the links to the right to view the artworks included in the exhibition and to see images of the installation in the museum's gallery.

Image Gallery →
The Avatars of Vishnu