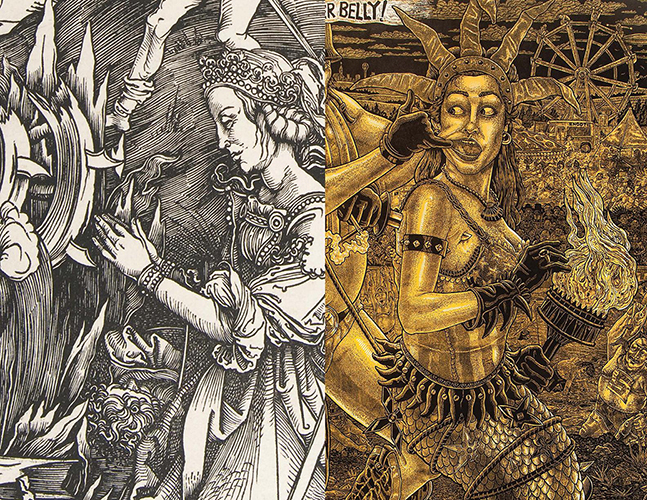 "It was just a real spiritual, knock you on your ass sort of awakening for me. In that very moment of pulling the paper off of the block I found what I was born to do." -- Tom Hück 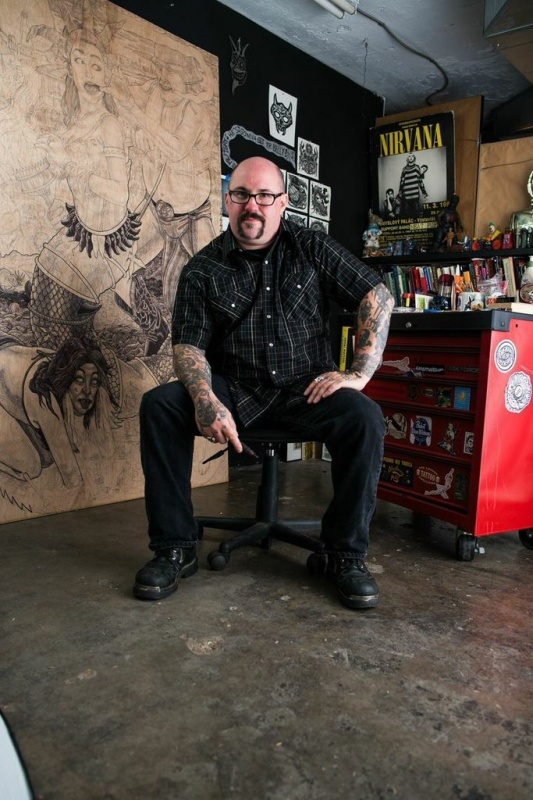 Contemporary artist Tom Hück (American, b. 1971) is a self-avowed troublemaker who, in his own words, has been “disgusting the masses since 1995.” Throughout his 20-plus year career, his brash sociopolitical commentary has drawn from great satirical artists like Hogarth, Daumier, and cartoonist R. Crumb. His technique, however, is inspired by the famed German woodcut artists of the Northern Renaissance, including Albrecht Dürer and Martin Schongauer. The exhibition Rival Cuts: Process & Technique in Prints by Tom Hück & Albrecht Dürer, brings together a selection of Hück’s woodcuts with works by Dürer, his printmaking hero. Created more than five centuries apart, the prints seen here display technical virtuosity, the two artists’ aptitude for pushing the medium of woodcut to its most visceral and corporeal limits, and Hück’s quest to rival the masterworks of his idol.

Since its emergence in the West around the turn of the fifteenth century, the medium of print has become home for the ambitious, obsessive creators and the unabashedly curious news junkies of the art world. The widespread production of paper allowed for the creation of multiple images, known as impressions, from a single block of wood or one engraved copperplate. Works of art, once singular and prohibitively expensive, were made both affordable and widely available. Many artists of the Renaissance were attracted by the ability to mass-produce and disseminate their work, but none more so than Albrecht Dürer. Although he was also a gifted draughtsman and painter, Dürer’s greatest contributions to art lie in the field of printmaking, which he almost single-handedly transformed into an independent art form. In his prints, Dürer achieved a level of imagination, tonal control, and technical mastery unmatched by his predecessors and coveted by later artists.

Born 500 years after the great printmaker, Hück first encountered Dürer’s work at age 12. He saw Dürer’s Apocalypse series at two separate locations during that pivotal year, a surprise that led to the young artist’s first lesson in printmaking: the possibility of creating multiple images from a single block. From that moment on, Hück has obsessed over the history of printmaking. He enters his studio each day with the goal of cementing his own place in its history, alongside the masters whom he considers his “family.” For example, Hück created The Great War-Madillo, as a tribute to Dürer and his celebrated woodcut, The Rhinoceros.

Like his Renaissance predecessors, Hück creates complicated allegorical and metaphorical imagery. Rather than drawing from the religious sources that predominate the early modern era, however, Hück’s content originates in his hometown of Potosi, Missouri, and surrounding rural areas. From exaggerated depictions of notorious events and legends to a biting ideological critique of the American heartland expressed allegorically through images of a traditional county fair, Hück’s woodcuts expose what he views as an underbelly of ignorance, debauchery, and dissolution that so often exists beneath the idyllic veneer of small town America. 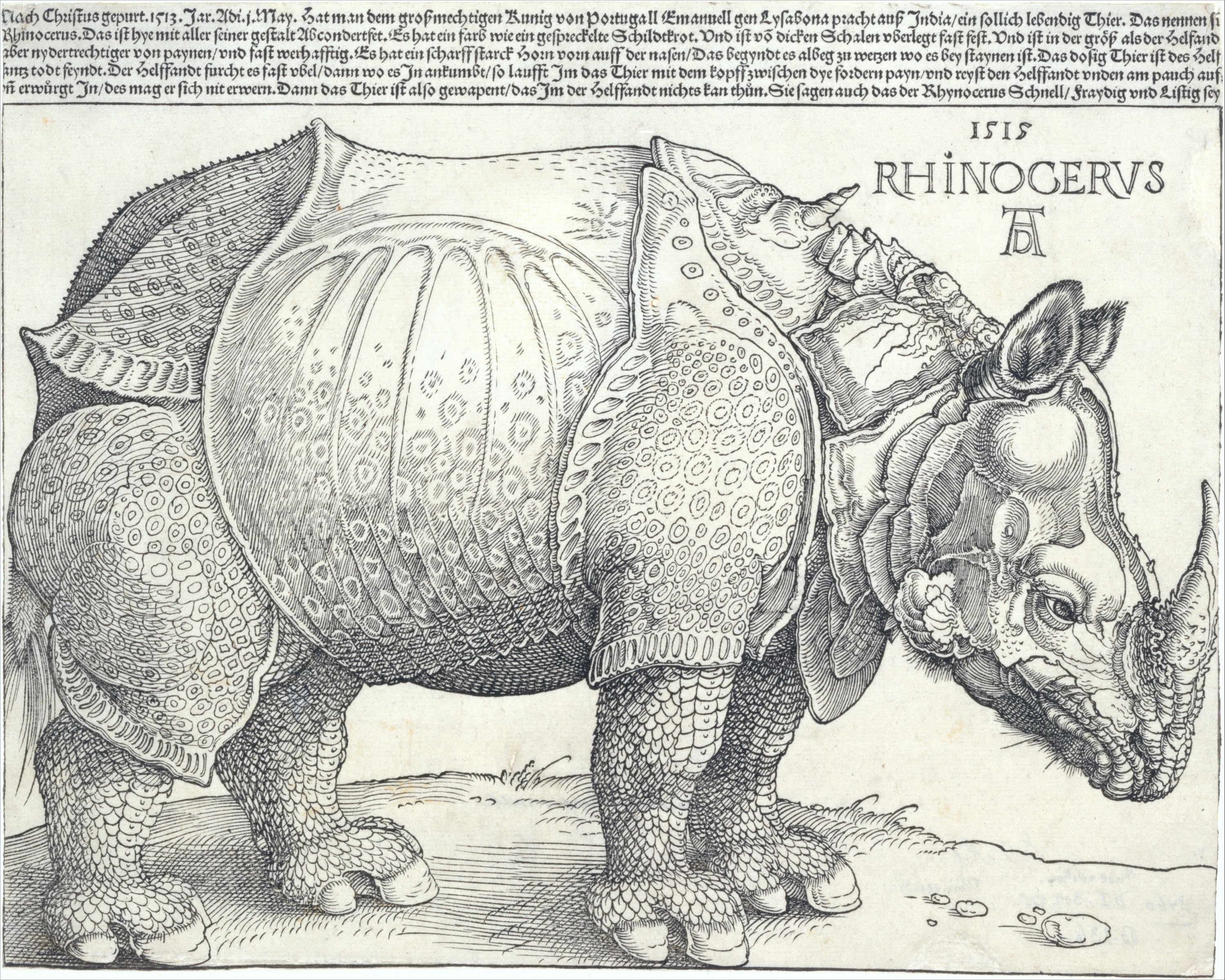 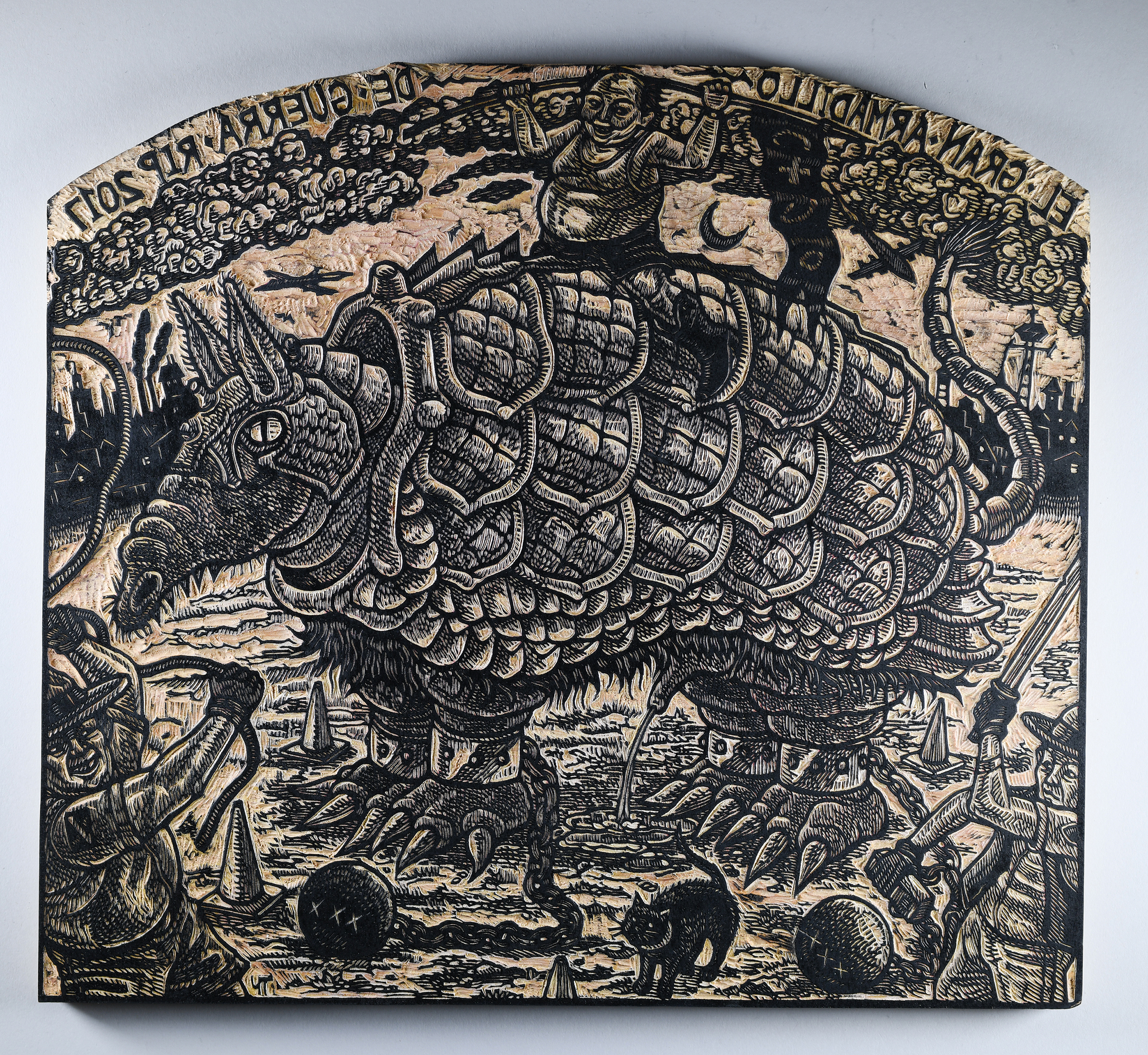